today was the third time i've raced the mt. evan's hill climb. this is one of the gems on the colorado cycling scene and the best climbers in the state are always on the starting line. the pro field even gets some pro tour riders gunning for the record ascent time (currently held by tom danielson from the garmin slipstream team).

the fun begins in idaho springs - a 45 minute drive from boulder - and follows one of the highest elevated paved roads in north america to the mt. evans summit at 14,190 feet. this works out to a 27.4-mile climb (there are a few short lived down turns in the road).

the boys from feedback sports were very motivated to work for former pro triathlete-turned-cyclist nate llerandi. they set the pace for the low gradient false flats over the first seven miles and by the time the first real spikes in road came, all had completed their work except for ben buxton, who took over and set a strong pace for the next seven miles.

at the halfway point at echo lake, the road turns right past the ranger station and the next two miles are steep roads. i moved to the front and pushed at the highest tempo i could without going into the red zone. after two miles on the front, i'd had enough and peeled off to see the group had whittled down from fifteen down to seven riders.

i was consistent the rest of the ride and always welcomed the short downhill portions to recover just a tad. the final five miles after summit lake were difficult but the roads featured short straightaways and lots of switchbacks. over these final few miles the summit always appears so close, but the riding goes and goes and goes.

stuck in no mans land up the switchbacks, i kept a strong tempo going and crossed the line in 8th place, happy with the effort after taking a break from the bike after the dead dog classic race. it was also an improvement of five minutes over my previous race times, but times are highly variable depending on the pace in the early seven miles of the race as well as the weather conditions. today the pace was brisk at the beginning and the temps were cooler with very little wind, so we really had an ideal day for quick times.

congratulations to nate and his feedback sports teammates as i know he's been focusing his season around winning this race. i don't know finishing times, yet, but i'll bet he threw down a fast one today.

next up is to continue getting some base mileage in both the running and cycling in preparation for ironman wisconsin on september 13th. for full results from the hill climb, go to www.bicyclerace.com

cheers,
lf
Posted by Finangers at 1:38 PM No comments: 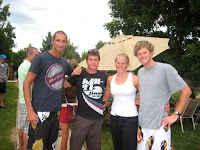 This was after a big racing weekend for Matty (far left) and Leon (second left) who raced at Lifetime Fitness and Boulder Peak Tri.

Leon has lived with Em and I during the last two summers to escape the Melbourne, Australia winter and race in our North American season. He's going to San Francisco for the Vineman 70.3 race this weekend.

Em and I will go Mt Evans tomorrow for the annual 27-mile hill climb. It's a solid two-hour uphill effort.
Posted by Finangers at 8:08 AM 1 comment:

I played baseball with Charlie for two years at St. Olaf College (he was a sophomore when I graduated) and he was by far the most dominating pitcher in our conference. Congratulations on a great career Charlie. You completed what most every ball player can only dream of doing! - LF

ST. PAUL, MN (July 13, 2009) – Fans root for the underdog and it’s no surprise that 5’10”, 160 lb. St. Paul Saints pitcher Charlie Ruud was a fan favorite during his five-year career. On Monday, the hurler who earned his Masters of Divinity and wants to become a minister, retired from baseball.

The 27-year-old Ruud ends his Saints career as the most decorated pitcher in the team’s illustrious 17-year history. Ruud retires as the all-time leader in wins (36), strikeouts (300), games started (72), innings pitched (458.0) and complete games (9).

Originally from Cannon Falls, MN, Ruud’s storied career began out of nowhere during a tryout camp in 2005. He so impressed manager George Tsamis that the right-hander out of St. Olaf College was called upon late in the season to make an emergency start. He hurled a complete game 7.0 innings in game two of a doubleheader, allowing three runs (two earned) on four hits while striking out five to earn his first win as a Saint. The rest of his career would take the same route.

"It was always an honor and thrill to take the field as a professional ballplayer. I'm deeply sad it will end, but I'm greatly thankful to the Saints organization, all the Saints' faithful, and especially George Tsamis and Jason Verdugo for having confidence in me and giving me the chance to do it over the last four years. It's probably the best one-day contract anybody in my circumstances could have hoped for."

In his first full season with the Saints, 2006, Ruud was dominant, tossing at least 5.0 innings in 19 of 20 starts and 7.0 innings in ten of those outings. He finished the season second in the American Association in games started (20), third in complete games (3), and fourth in innings pitched (132.0) and strikeouts (96). He helped pitch the Saints to a North Division Title as he put the Saints up 2-1 winning game three going 7.1 innings pitched allowing just a pair of runs while earning the victory. In the American Association Championship series Ruud won game two going six innings allowing just two runs, allowing the Saints to even the series.

The 2008 season was highlighted when Ruud set the all-time Saints win mark on June 20 against the Sioux Falls Canaries with win number 27. The man he surpassed, Mike Meyer, was in the opposing dugout as the pitching coach of the Canaries. On July 22, he pitched in front of the home crowd in St. Paul at the All-Star Game and hurled 2.0 perfect innings.

This season, Rudd surpassed the all-time strikeouts mark on June 25 against the Canaries striking out Jared Lemieux in the third inning. The strikeout was number 292 of his career. In 13 games this season (12 starts), Ruud was 4-3 with a 4.72 ERA.

“Charlie Ruud is, and always will be, a true Saint,” said Tsamis. “He is one of the toughest players that has ever put on a uniform for us and has done an excellent job during his career. He is one great kid and it really is a sad day.”

Ruud was a standout with the St. Olaf Oles and a four-time all-MIAC selection. He went 27-10 with a 2.38 ERA in four years. During his sophomore season he was named the league’s Pitcher of the Year.

The Saints offered Ruud a coaching position with the team, which he is mulling over with his family. During the 2008 off-season, Ruud earned his Masters of Divinity allowing him to fulfill his dream of becoming a minister. In March, he and his wife Becky celebrated the birth of their first child, Lucy.
Posted by Finangers at 11:36 AM No comments: