The inaugural Challenge Bahrain lived up to it’s hype and delivered an athlete experience unlike any I’ve previously been a part of before. This was the second Challenge Family event I have raced, and from an athlete’s perspective, we were treated like royalty throughout the time spent in the small Middle Eastern island country. 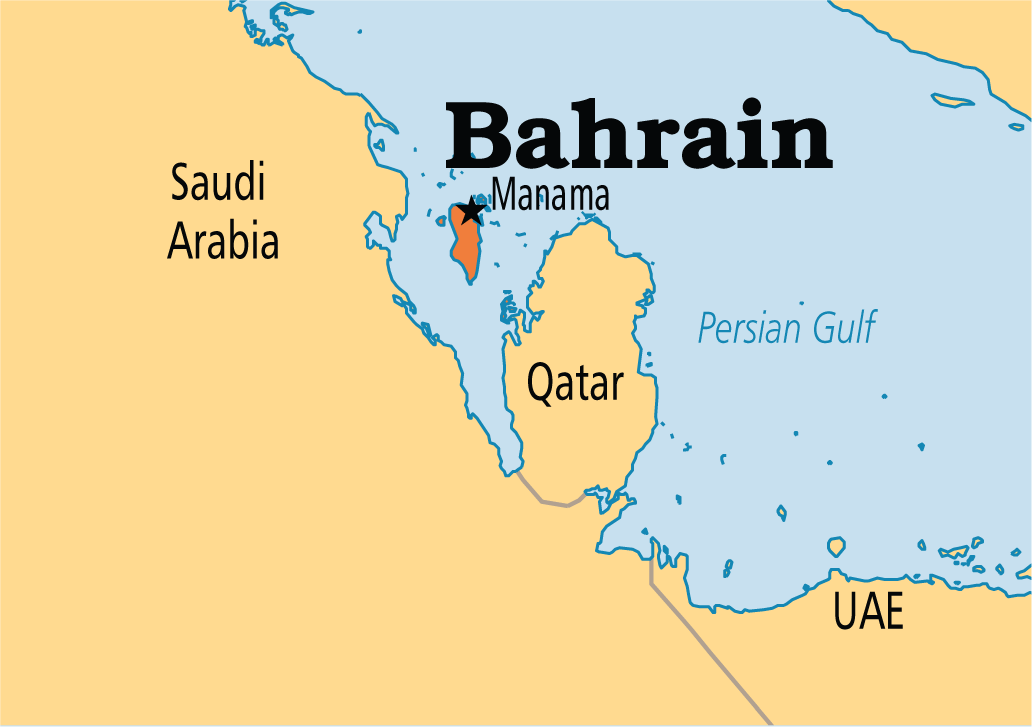 The first indication Challenge Family pulled out all the stops was upon arriving at customs in Bahrain. There was a special hospitality area for all participating athletes. The usual $20 tourist visa fee was waved and athletes were rushed through our own VIP line. Airport passport and customs lines in the Middle East are typically a big problem so saving an hour of time upon landing was an appreciated perk that did not go unnoticed.

My parents are retiring in the summer of 2015 from careers spent in Saudi Arabia so this trip was marking the last time I would be traveling over to the Middle East in the foreseeable future. It was a short trip across the King Fahd Causeway, the 30km bridge connecting Bahrain and Saudi Arabia, and one they make a few times a week to enjoy a bit more Western culture. They were as excited as I was to see this world class sporting event.

As we drove to our hotel from the airport, it was evident the marketing and promoting of this event on the local level was unparalleled to anything else in the triathlon world. Huge signs lined the highway announcing complete road closures on race day as well as massive motivational signs urging on the competing athletes. Indeed, we would have an entire side of the main highway in the country (4 lanes wide) to ourselves, free of vehicle traffic, on race day. 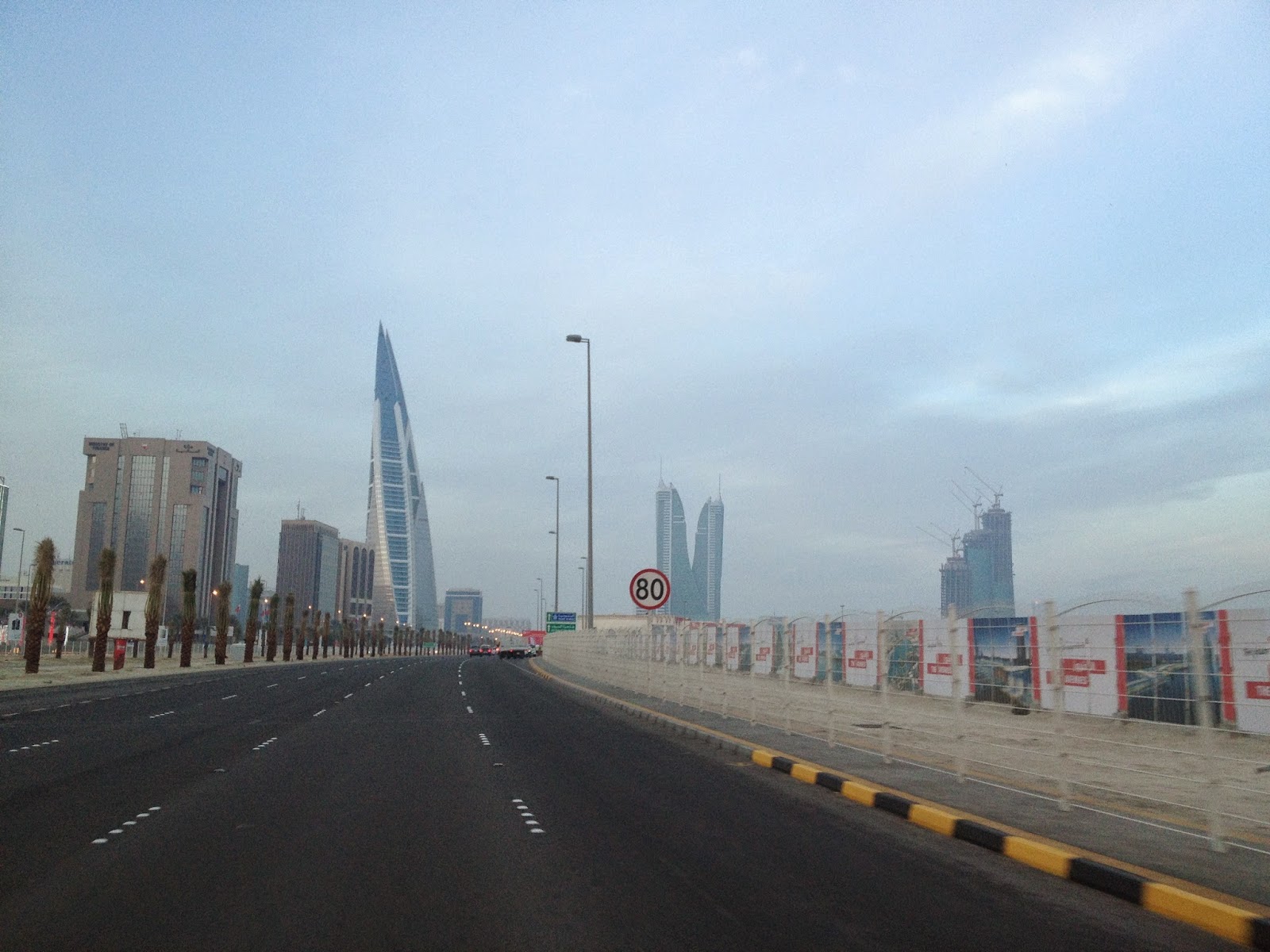 One of the only minor downfalls of traveling from the US on a short turnaround is jetlag but as a friend who is a global executive and frequent international traveler suggested, it is made easier if you remain flexible and realize that despite being a bit blurry eyed you can still achieve an excellent performance by keeping a positive outlook on the situation.

I arrived to Bahrain on Thursday around midnight so Friday was spent running the usual  pre-race errands including bike building, packet pickup, and bike check-in. As Bahrain is a small island, only 34 miles from the northern to the southern tip and 11 miles from east to west, the race was a point to point and required checking in our run bag the day before too.

Our good family friends, Bob and Deb Lumpa, made the drive from Saudi Arabia to check out the spectacle and we met them at the Bahrain International Circuit, the ten year-old F1 race track, which doubled as the main hub of all the race activities. As this was the first triathlon event they had seen, I warned them it was likely to be the finest endurance production in the world, and not to false expectations if they attended other events in the future. As career employees of an oil company in Saudi Arabia, and knowing the intimate involvement the Bahraini Royal Family had in the production of this event, they knew the Middle Eastern mindset and knew that no expense would be spared.

After picking up packets and checking out the F1 track, we drove back to Bahrain Bay where the Swim Start and T1 was being staged. It was an elaborate set up with massive billboards lining the entire bay area promoting the event sponsors and the race organizers. We learned they had paved the entire T1 area earlier in the week and the pavement was as smooth as a baby’s bottom. They had also constructed a floating pontoon that athletes would use entering and exiting the waters. Having produced events in San Diego, I was utterly amazed in the quality of the set up at the start area. Not only would this have a positive image amongst racers but as the event was being televised live on Bahrain TV as well as live stream on-line, the world would take notice of their attention to every detail.

I was excited for race morning for two reasons. It was a bit of a homecoming race for me as the first triathlon I ever raced was in my Dad’s 8th grade PE class in Saudi Arabia. On Saturday, there were over a hundred athlete racing from the Saudi Aramco communities and many times more from the surrounding Gulf Countries. It also marked the last race of the year for me so after a full season of racing I was looking forward to closing the books on the year.

All the hype leading into the event was on the pro race as the best in the world were gunning for their share of the $500,000 prize purse, making it the richest half-iron distance race in history. To the credit of the Challenge Family, they started pro men and women separately and provided a 30-minute gap till the start of the age group race. Being in the first wave, it was fun to have a front row seat and watch the pros exit Bahrain Bay. 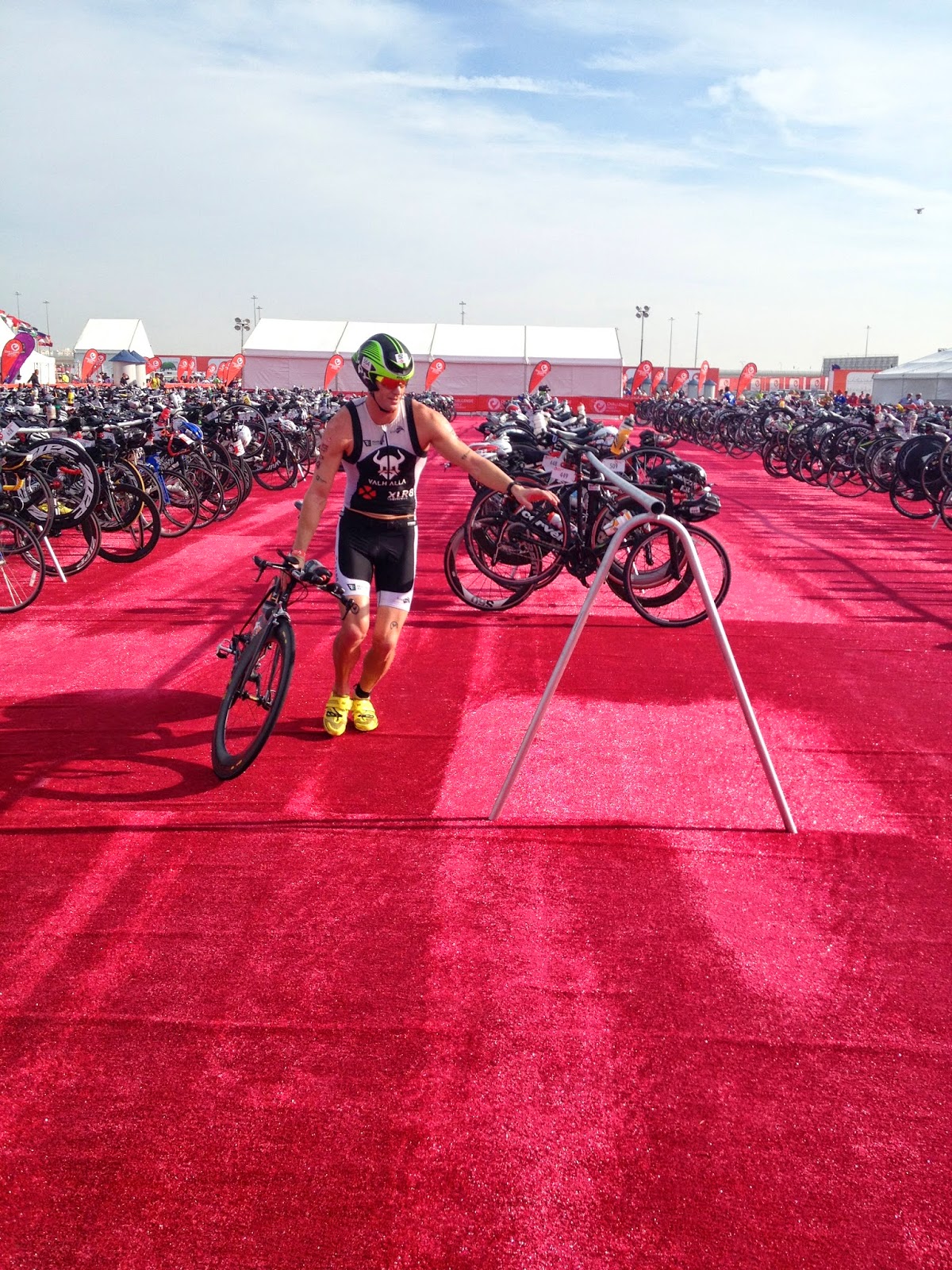 The 1.2-mile salt water swim was simple to navigate as it was an out and back course and Bahrain Bay was situated with massive skyscrapers on each side which served as excellent landmarks to reference and a bit of architectural eye candy during the swim. It was wetsuit legal and the water was cool so I had nothing to complain about. As is typical for me, I had a quick start and was with the two leaders for the first 400-500 meters. Then, as is also typical for me, I had to back off the pace and settled into my own rhythm. Near the turnaround point, a handful of swimmers caught me and I tailed on the back of that group the rest of the way. 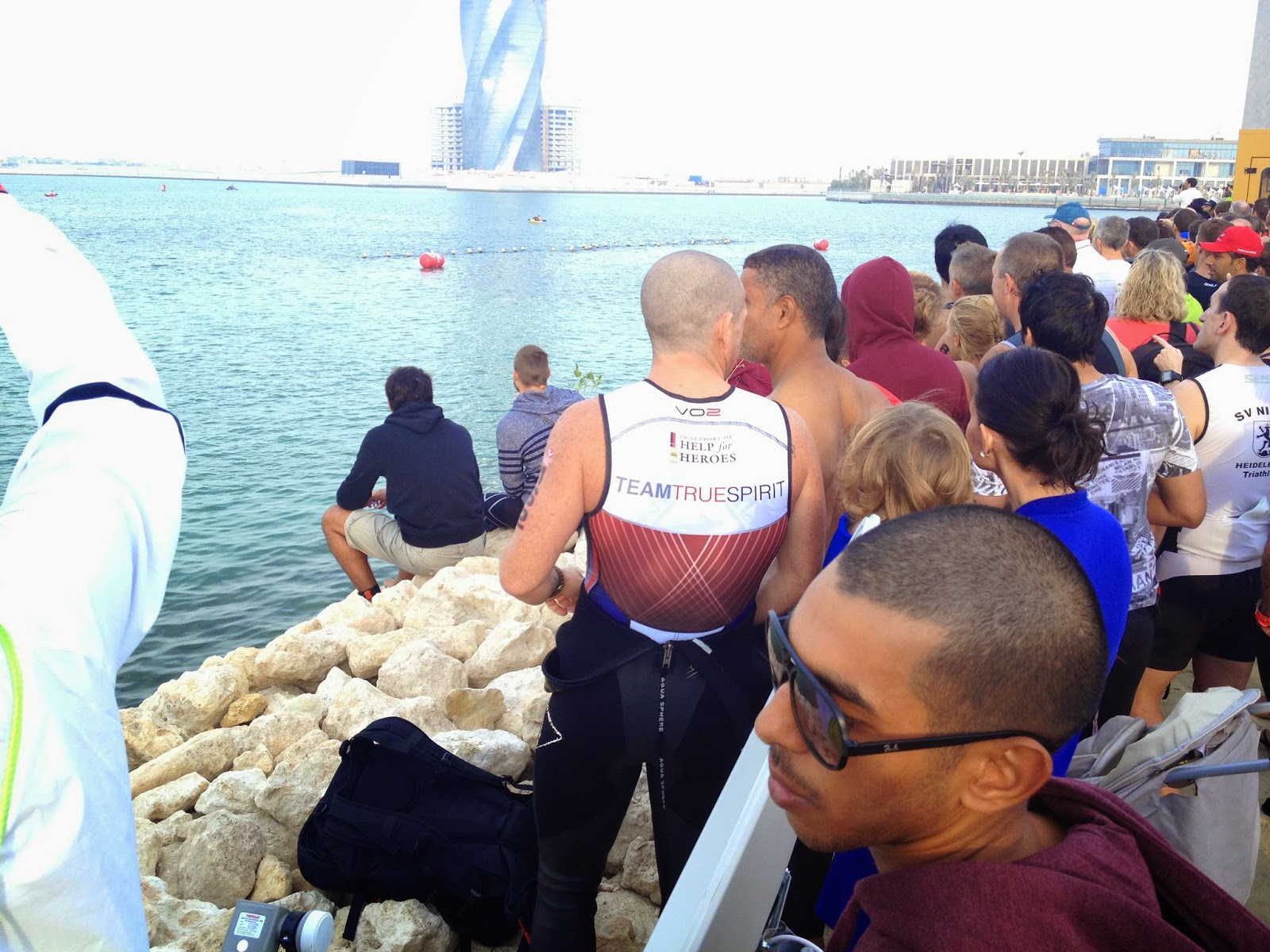 Exiting the water it was impossible not to get reenergized by the crowd support and Whit Raymond working the mic with his boundless energy. It was a 200 meter run to the bike bag grab and into the change tent and I exited T1 in 5th or 6th place in the age group race. 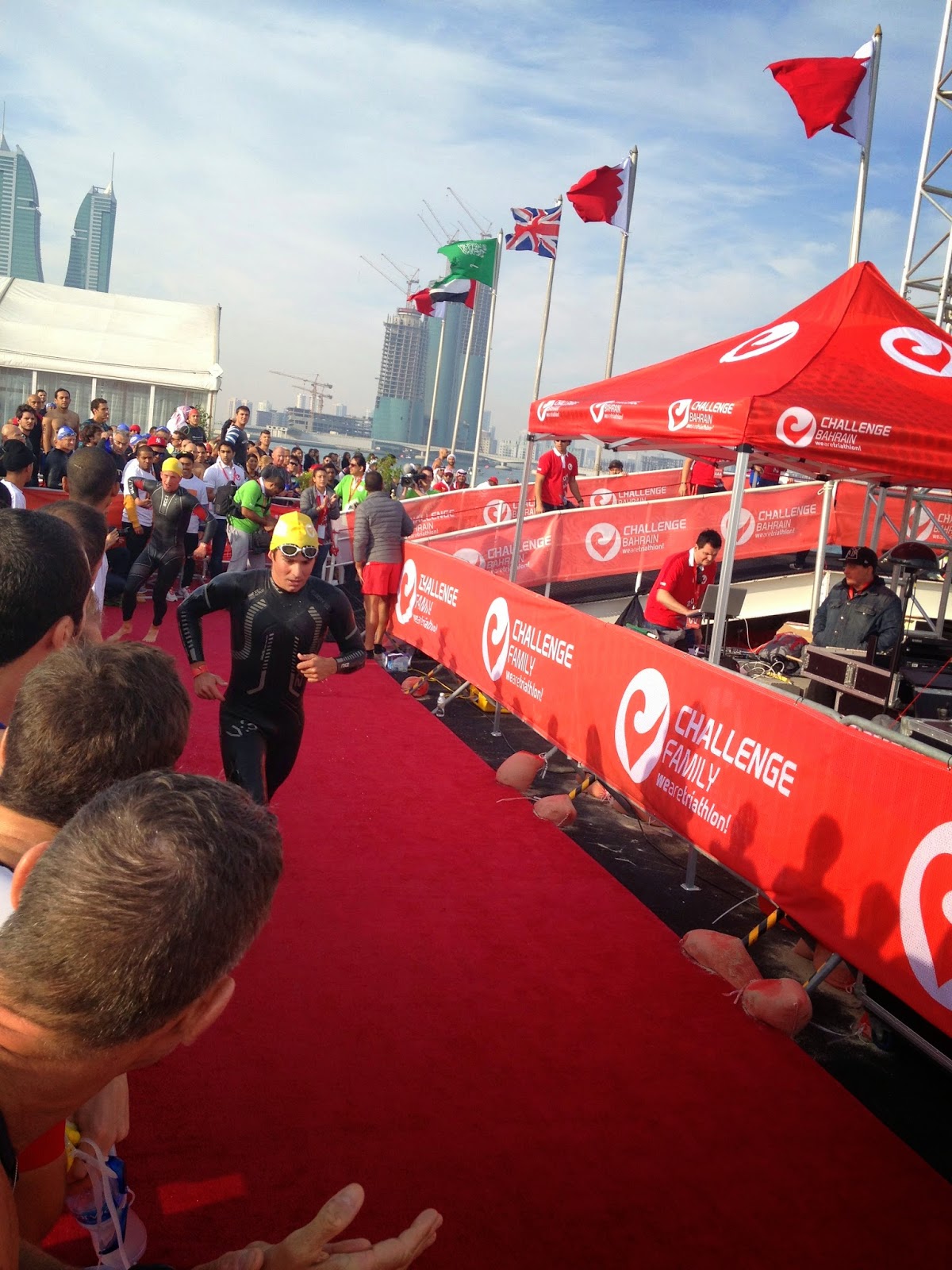 My goal on the bike was to push as hard as possible over the first 20km and then try to gauge my position in the race and decide how my body was responding on the day. I hadn’t put in a lot of volume in the lead up to the race and opted to include only quality sessions either at VR Cycling Studio with Steve Elliot or on my home trainer utilizing The Sufferfest video workouts. I knew I had good power and top end in my legs but I didn’t know how they would respond to the overseas travel or the whole 56-mile course.

I was simply amazed the entire 56-miles that we had a four-lane highway to ourselves! At different points during the ride, I rode in the far left lane, the far right lane and smack down the middle depending on what I imagined were the best tangents or the best spots to take advantage of the persistent crosswinds. The bike was a point to point that also served as a bit of a tour of the island and it was never lost on me how lucky we were to experience this first hand look at Bahrain.

I knew if I rode well I could find the front of the race but you can never predict who might be on the starting line and what their pedigree or shape is. In the case of the race on Saturday, Nick Gates, a former pro cyclist from Australia who twice rode in the Tour de France for the Lotto-Beilosol team was setting a fierce pace. I had bumped into Nick prior to the swim start and he didn’t let on to his cycling pedigree, only that he had recently relocated his family to Thanyapura and had been training a lot with Macca. Needless to say, Nick did collect the fastest age group bike split on the day but I only managed to lose four seconds to him. Unfortunately for both of us, he had a tough time shaking the eventual amateur race winner, Patrick Dirksmeier, who was tucked closely behind Nick and likely enjoying the tow. 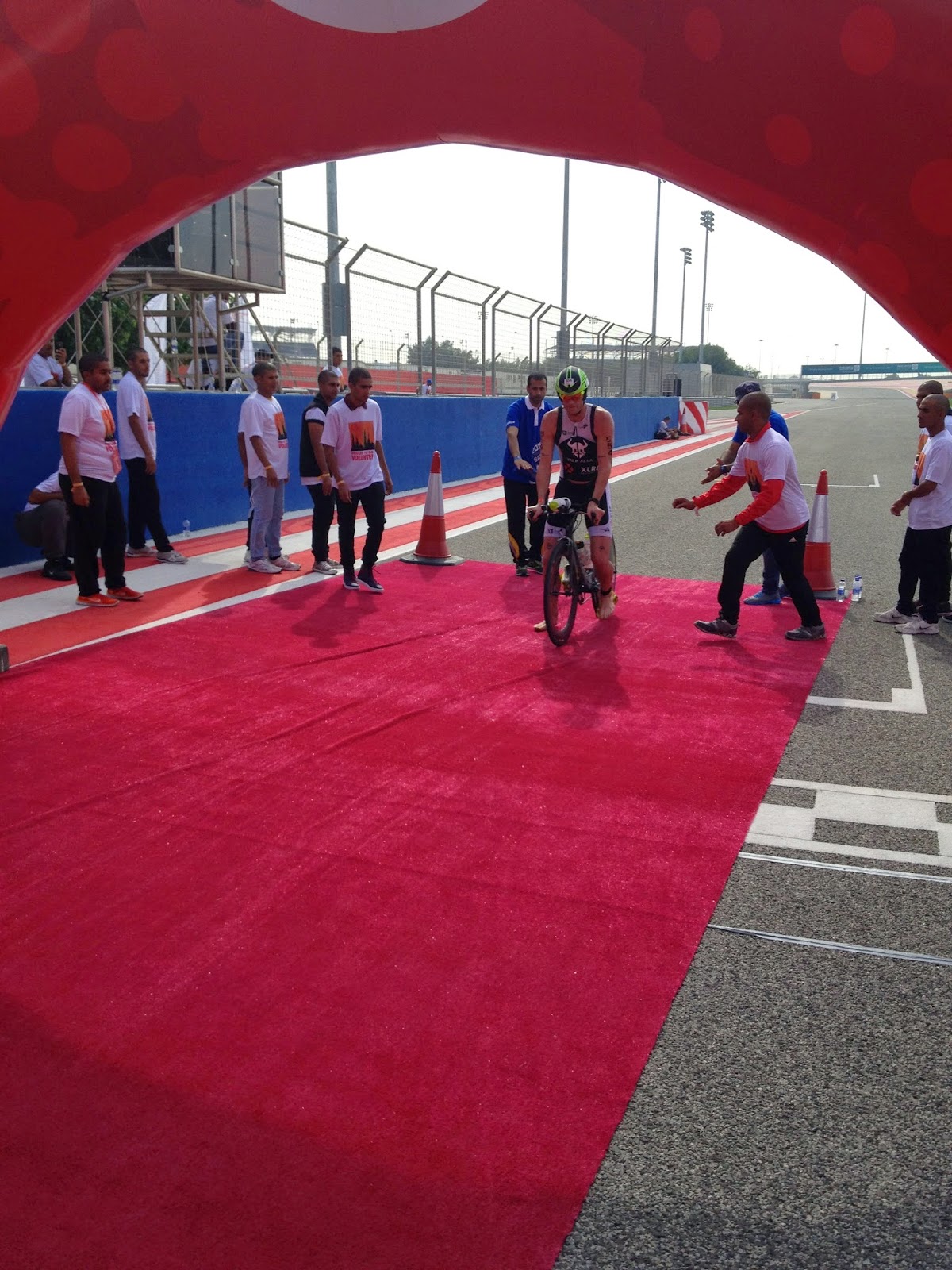 The bike finished with a hot lap of the F1 track. It’s not often you can dive in and out of corners with complete confidence. Oddly enough, after a cramp free ride, the instant I reached down to unstrap my shoes for the T2 dismount, my legs locked up with massive cramps. My dad happened to be right at the line and caught the most pathetic dismount ever witnessed on video! Thanks Dad. Stopped dead in my tracks, I hobbled ten feet over to a retaining wall and stretch out my hamstrings, glutes and quads for what seemed like an eternity. I finally got to a point where I could hobble into the T2 change tent and upon trying to put on my socks seized up with cramps once again. It was one of a few opportunities my parents and the Lumpas could see me and I looked like a wounded deer as I shuffled out of T2 in 3rd place. 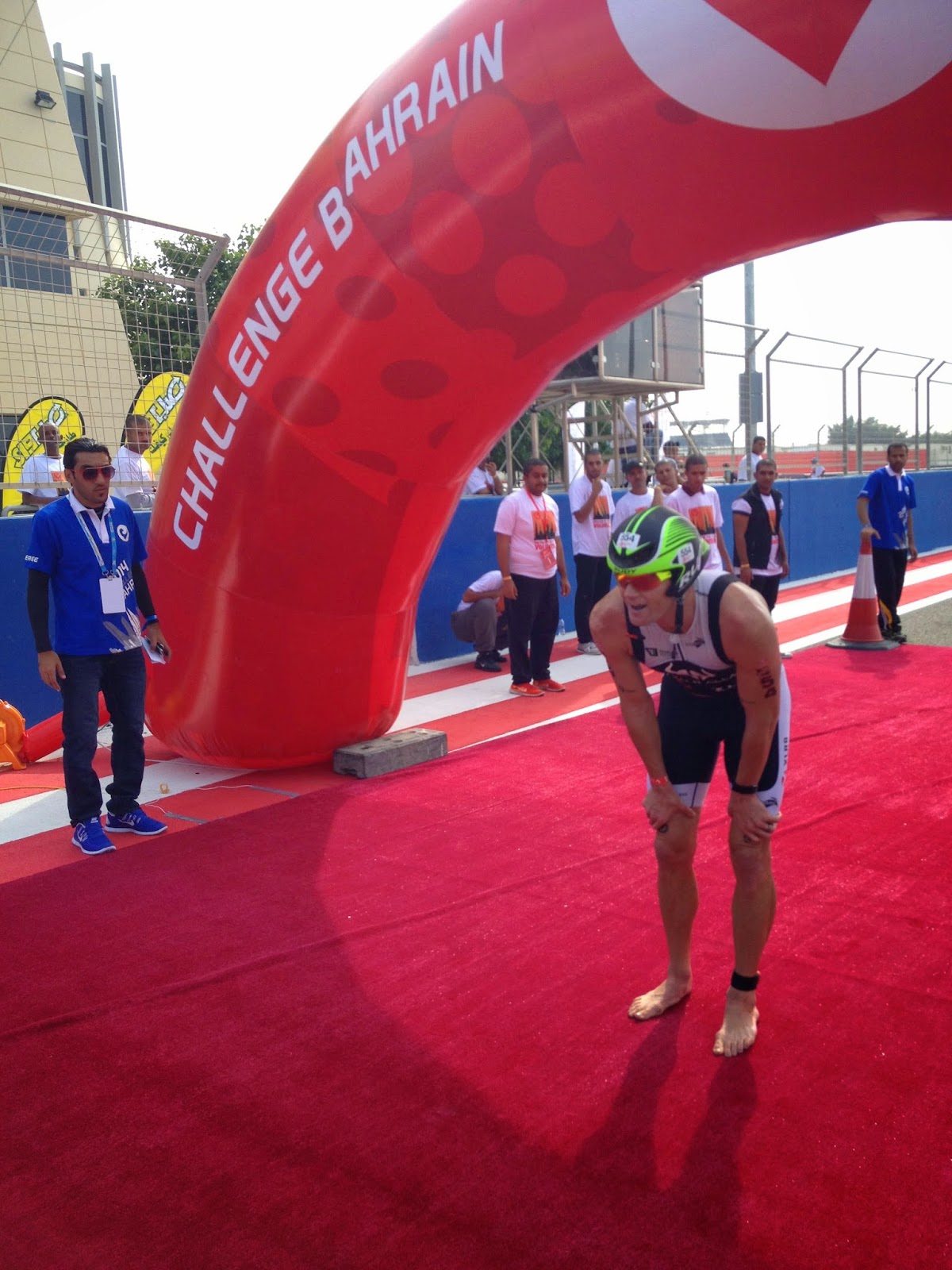 The run started on the F1 track and then proceeded to the Al Areen Wildlife Park which was plush with gazelle, giraffes and ostriches. The cramps subsided after the first mile and I found my stride. Around mile two I saw the men’s pro leaders closing in on the finish. Michael Raelert looked like one of the previously mentioned gazelles and not too far behind in 3rd was Tim Reed, who from my vantage point was floating over the road in hot pursuit of Andreas Dreitz who was 200 hundred meters in front of him.

Inside the park, the aid stations were electric with enthusiastic volunteers but otherwise only the odd rogue ostrich was seen, meaning they would periodically run in front of the running path. I held third in the age group race through the halfway point but was passed by Danish coaching legend Michael Kroeger, coach of Dirk Bockel and Camilla Pedersen, as well as the diminutive Swissman Patrick Wallimann. Up ahead with a big lead were Dirksmeier and Gates. I actually started feeling better in the closing miles and I think it was in part because I wanted to find out the final podium placings in the pro event. I lost one more spot at the 15k mark as another former pro cyclist turned triathlete, Tomas Swift-Metcalf passed me, but held onto 6th place across the line. The final kilometer, including the finish chute, was on the F1 track with what seemed to be thousands of fans cheering. Of course, many were waiting for Sheikh Nasser to finish, and indeed the Prince is a fast man, finishing in 4hrs 21 minutes! 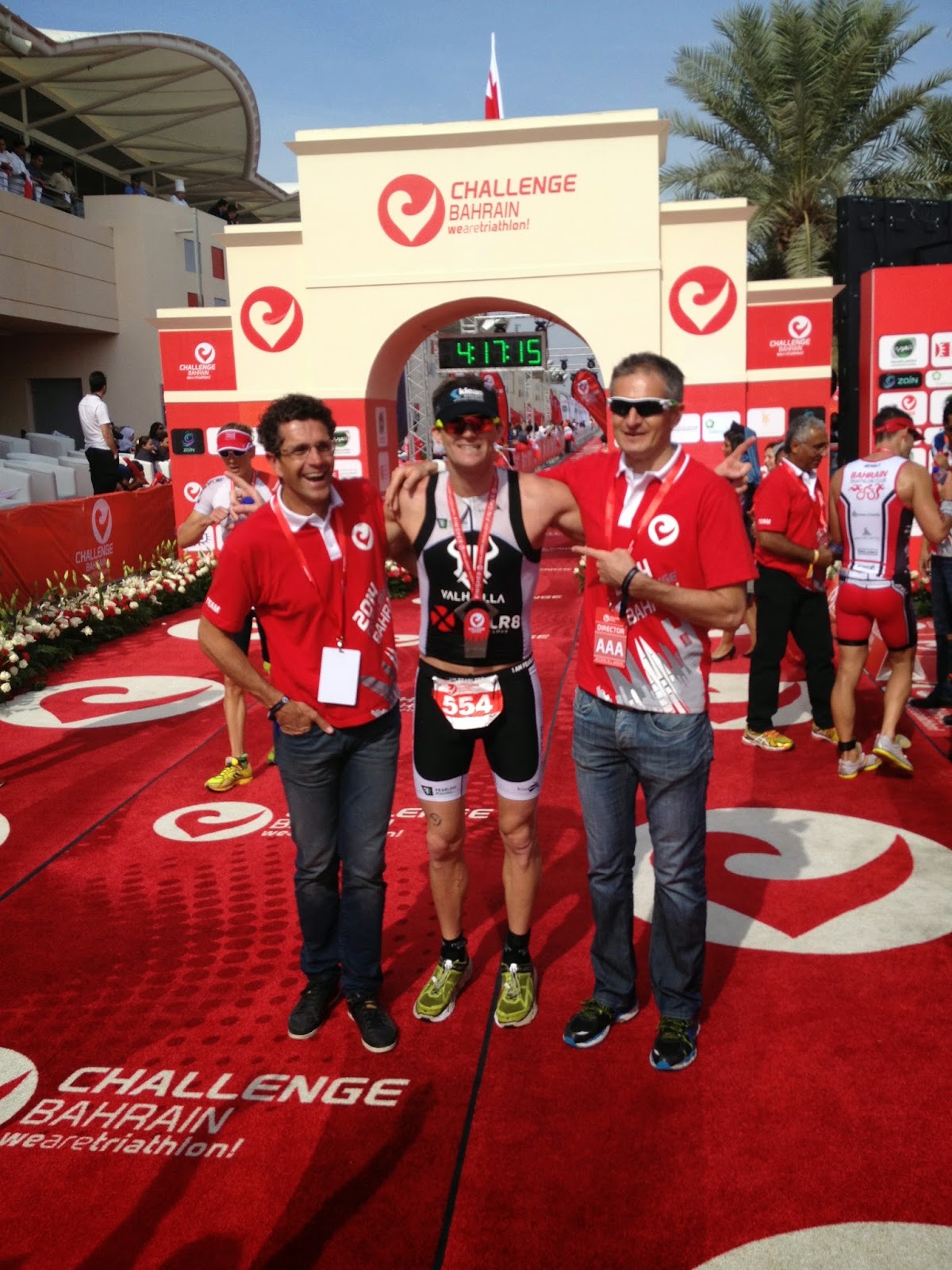 The party didn’t stop at the finish line as athletes were provided with the finest Finisher awards I've ever seen, a puffy jacket from C4, and shawarmas (see pic below) for post-race food! Later that evening Challenge had organized for the Dire Straits to play at the post-awards party. It capped off a truly marvelous event, highly recommended as an end of the season experience not to be missed. Sheikh Nasser also announced at the awards ceremony a new Triple Crown Series in 2015 to take place in Dubai, Oman and Bahrain that would provide a further platform for triathlon to make a positive impact on the lives of youth and others living in the Middle East. As for upping the ante in terms of global exposure for the sport, the one million dollars in prize money, will surely have lots of media interest following these events and the athletes gunning for the big bucks! 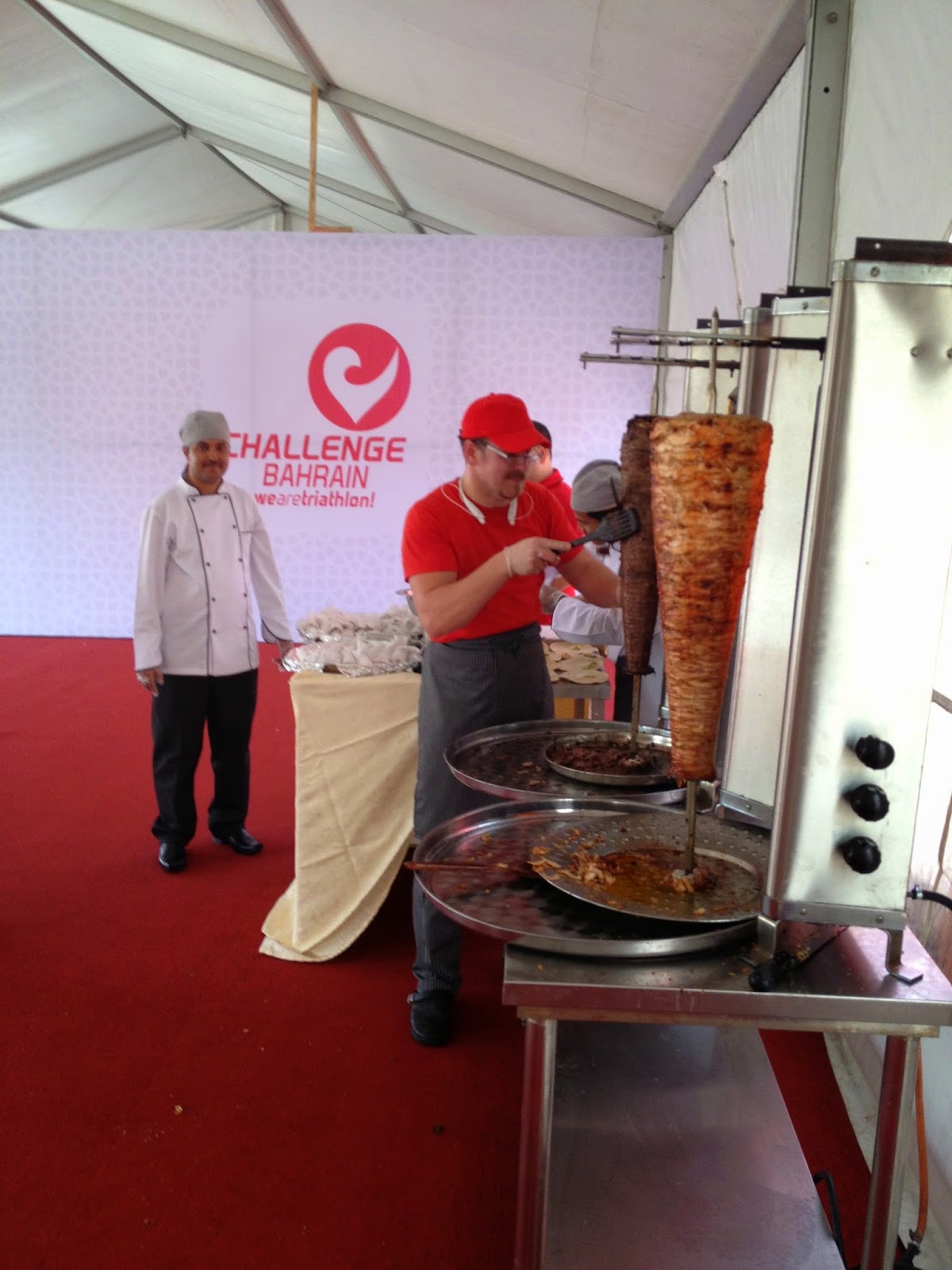 Posted by Finangers at 9:14 AM